The Brutal The Better 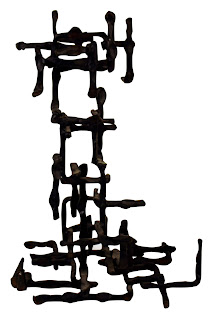 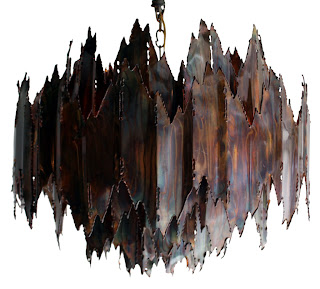 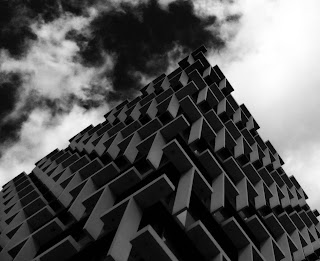 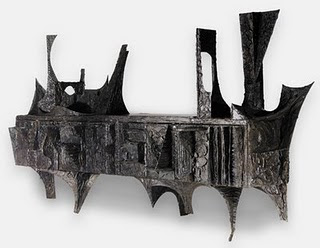 I have always been- and still am -a big fan of "Brutalist" art and architecture. The term is not commonly known as it originated in the late 1950s and continued into the mid-1970s, but has regained it's popularity in design the past few years - not so much in new design as it is in recovering it's origins.
Perhaps it's popularity today is mostly credited to Paul Evans whose hand made designs of metal sculpted furniture has made a huge comeback in home decor and mid century modern collecting.
But the origins or "Brutalism" date to over a decade before Evans introduced his sculpted bronze series of furniture.
The term; "Brutalism" was coined in 1953 by two architects - Alison and Peter Smithson and was spawned by the modernist architectural movement but relating to a phrase used by Le Corbusier translated from the French "beton brut" or "raw concrete." The material was used widely in post WW2 European, North and South American buildings, however the brutalist style was usually formed with striking repetitive angular geometries, creating sculptural characteristics and sometimes revealing texture of the wooden forms used for castings.
Typically as interior design follows the form and function of its habitat, brutalism found its way in furnishings, but as concrete is far too heavy the materials were substituted with bronze coated resins or metals. This is most evident in the Evans sculpted bronze series but we also see obvious attempts in the stunning copper chandeliers by Tom Greene for Feldman Co. and in Fantoni's abstract iron sculptures. (Pictured above).
Critics of the Brutal period architecture found the buildings to be "Monstrous, cold-hearted and inhuman" but perhaps the biggest critic were the buildings themselves, some of which decayed, crumbled and stained if not easily vandalized by graffiti, this making alternative building styles more superior. By the mid-1980s the brutalist popularity was dead making way for Structural Expressionism and Deconstructivism. Newer buildings soften their angular lines and existing concrete facades were subjected to sandblast or stucco. Thankfully, the furnishing have remained intact and have made a comeback... however, in the day it was all about sets - today the last thing you want is a room full of brutal furniture. Ah, but the beauty of adding a piece here and there can bring an important moment of mid century modern architectural history alive in your contemporary setting. Check our online store for some examples of brutalist furnishings now available in home decor, furniture and lighting.
Posted by modlife at 12:45 PM 5 comments: