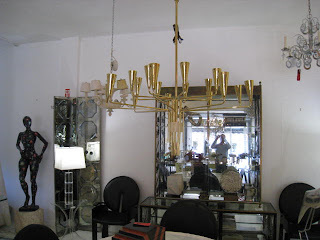 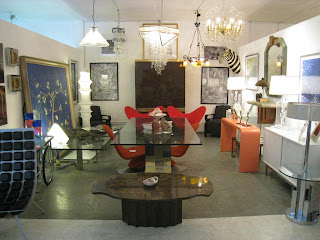 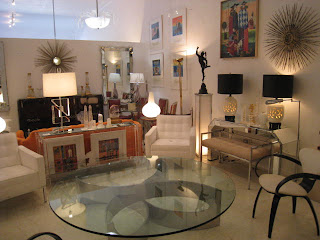 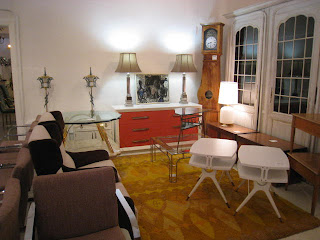 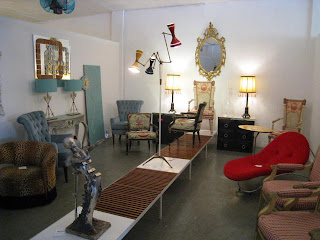 One of my favorite reasons for visiting Florida, outside of getting out of Chicago in the winter, is for the many great places to scout out vintage home furnishings. And when in Miami, you can do no better than Biscayne Boulevard where you can hit dozens of dealers within 40 blocks of each other that specialize in 20th century furnishings, art and lighting. Most of them specialize in American and Hollywood Regency designs from the mid century but the last few years has attracted a growing number of European dealers as well, specializing in American, Italian and French modern furnishings.
Before I became a dealer in 20th century furniture and art, I visited a store in this area called Belvair owned by Jeffrey Ligan. The space itself was incredible; a restored vintage building with soaring pillars, ornamental ceilings and mid century modern room dividers made from exterior building facades. As for the inventory - simply amazing. He was one of the first dealers I saw who where truly reinventing pieces - not just buying and selling. Metal lamps by Rembrandt where flawlessly replated in brass or nickel and brought up to date with decorative shades. Kent Coffey dressers where relacquered and hardware was restored to it's original luster. Parzinger casegoods and lamps looked as if they where just produced or preserved for the last 50 years.
Inspite of the falling home prices and rising home foreclosures in south Florida there are still a significant amount of dealers in the Miami area and more are attracted to the area as well as in Palm Beach. And for those who don't want the responsibility of operating a store, there is the Miami Antique and Design Expo. (M.A.D.E.) at 8330 Biscayne Blvd. In my last visit I was surprised to find that Belvair had moved into this multi-dealer space and sold his building to a New York dealer. M.A.D.E. is owned and operated by New York natives and brothers, Robert and Carl Massello. It did not take long for this store to catch on and it does not take long for the merchandise to move.. yes, even in this economy. The only thing better than M.A.D.E. is the addition of Belvair which makes M.A.D.E. Modlife's pick for Miami's best destination for mid century modern furnishings. You can find there inventory on 1stdibs.com
Next stop: Ft. Lauderdale.